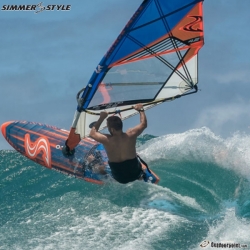 The G4 Quantum is an evolution of the popular G3 shape designed for wind swell type wave sailing. Although it excels in onshore conditions, it is actually the most versatile wave board in the range, featuring a huge performance register and super easy sailing in any type of wave. Thanks to the five carbon slotboxes you can tune the board for a huge spectrum of conditions, from light wind to high-wind and from onshore to sideshore. Quantum is able to adapt and thrive in any environment.

Keeping with the popular traits in previous
versions of Quantum, it is super loose and
effective in smaller surf, but now it also
handles bigger waves, with faster down the
line riding capacity and snappy rail to rail
turns. It also handles choppier conditions
more effectively due to the single-to-double
concave which absorbs chops and drives
the water towards the fins with a slight V in
the tail. This hull shape configuration creates
a stability and control even in the most
demanding conditions.
The wider and curvy outline allows Quantum
to stay lively even when loaded with a larger
sail.

This very effective volume distribution also
allows the rider to choose a slightly bigger
board yet still have drive in turns and a
tight turning radius.

If you’re looking for one board that does
it all, Quantum is your weapon of choice.

The tri fin Quantum rivals in most freewave boards for early planing, upwind performance and ease of sailing while still providing awesome turning performance. The tri fin setup provides plenty of power for bigger sails and excellent control for jumping. On the wave this setup gives the best possible projection and drive in turns, assisting the sailor in keeping speed through the bottom turn, even in slower waves.

The twin fin Quantum is the fastest and most free and lively running of the bunch. With only two fins, drag is lower and the fin power acts further back on the board. This lifts the nose of the board which in a straightline adds further speed and gives more looseness and quicker reactions in turns. The combination of twin fin and the fast tail rocker provides great ability to set up the top turn either for slashy release or solid power hooks.

For sideshore, bigger waves or choppier conditions, a quad setup will add total grip and control. The front fins will push some more rail in the water and lower the nose, adding more security both on the way out and on a fast wave. The lower maximum fin depth also gives a smoother and easier turn entry at very high speeds,which comes in handy when you need some fin for upwind.
FEATURES

- One board for all conditions.
- Medium rocker, with a fast tail design and low drag curvature for optimized to performance in a wide range of conditions.
- Shallow single concave feeding a light accelerating V, creates control and predictability but allows fast rail to rail performance for snappy top turns.
- Shortened swallow tail increase responsiveness in tight turns.
- Quantum comes with 5 carbon slotboxes which gives you a large spectrum for trim options.