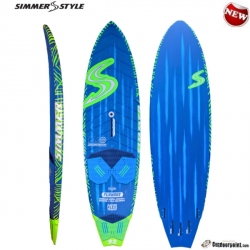 An extremely efficient rocker with low-drag entry gets the Flywave up and moving with only the slightest gust, increasing both it’s ability for jumping  as well the ability to catch more waves in lighter winds. Combining this rocker with a double concave V bottom creates a fast  and smooth rail to rail performance as well as excellent control at speed or in messy conditions, whether going for big jumps or blasting down the line in waves. The Winger Swallow tail design has a straight edge outline behind the winger, which adds considerable grip and stability in powerful top turns. The Flywave can easily adapt to different turning and riding styles, it can be ridden in hollow sections of small waves with quick aerial rotations, as well as perform in longer drawn out turns in much bigger surf where you need to trust the rails with your life.
The Simmer Style Flywave G4 is the latest
and most high performance incarnation of
our ground swell design.
The G4 Flywave has a solid, well proven big
wave heritage with a rocker adapted from
Kai Katchadourian's Peahi board. By fitting
this super fast and stable rocker into a curvier
and shorter outline with winger swallow tail
that ends close to your back foot, we tuned
the performance of the board to also fit the
modern and slashy style of World Cup prodigy
Marc Paré. The result is a board that provides
excellent agility and lets the rider adapt
the turning radius to any type of wave.
The control and speed down the line is
retained even in the biggest and fastest
of waves.

STANDARD FIN SETUP // QUAD
Equipped with a quad fin setup, the Flywave G4 rides with more grip and control at higher wave riding speeds. The power of the fin cluster acts further forward, which drives the front rail into the water and gives the board added control in drawn out turns. At the same time, the shorter depth of the two rear fins makes it easier to set the rail at high speeds which means that the board feels more responsive in fast side shore or cross offshore conditions and in any situations where containment of speed trumps production of drive.

ALTERNATIV FIN SETUP // TRI
On the wave, the Tri Fin setup will give you the best possible projection and drive in turns, assisting the sailor in drawing aggressive turns in fast clean waves as well as in keeping speed through the bottom turn  in less powerful waves. The Tri Fin setup will provide early planing, great upwind tracking and ease of sailing while still providing a insanely tight turning radius. Versatile and snappy with a dependable reliability are the main characteristics of this setup.

- Fast V based rocker for early planing and control at high riding speeds
- Accelerated V towards the tail and a short swallow tail design for snappy rail to rail performance and preserved speed in powerful cutbacks
- Winger design with a straight tail outline enhances grip in top turnsThin rails in the tail for increased responsiveness at speed
- The Flywave comes with 5 carbon slot boxes to allow fine tuning of the riding characteristics by switching between thruster and quad setups.