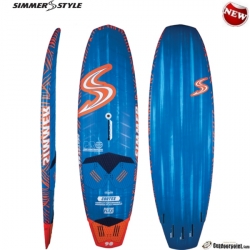 The brand new Simmer Style Cortex will change the way you look at an average day. Cortex features extremely short length and a narrow outline with diamond tail configuration. Combined with a very fast rocker, Cortex is extremely agile and tight turning. The parallel outline and smooth rail flow keep you in complete control during quick rail to rail transitions. Optimized for both sideshore and onshore real world conditions Cortex delivers snappy turns and quick reactions in the traditional windswell zones and can also be tuned to slice and dice in more side offshore down the line environments.
The Cortex may be a new school short board,
but it has a long history. The rocker, spiral v
and concave profile has its roots in the
original Simmer freewave board. When Kai
Katchadourian needed a dedicated board for
Peahi, aka Jaws, the controlled but still turny
freewave shape was chosen to form the basis
for the unparalleled speed and control that
such a board requires. Freewave was a great
hit and the dependable bottom shape has
since been used in a variety of shapes in
our prototype process. The most exciting
of those designs became Cortex where
the fast and controlled bottom, based on a
progressive rocker flow  and double concave
v bottom, is combined with a parallell outline
and smooth rails. This creates a board that
is an awesome performer for real world
conditions where it delivers snappy turns and
quick reactions. Kai's original spiral Peahi
V-bottom heritage still shines through on
rail stability and general control through
rough conditions, yet Cortex and it's short
length and aggressive stance has changed
the game forever.

The mechanics of this shape is a combination of several design choices; The fast and controlled bottom combined with a sleek, low entry outline provides excellent flow,  especially in slower waves. The squared off nose allows the board to fit in tighter parts of shorter trough waves while still allowing a long enough rail line for solid full rail carves. The shortened diamond tail and accelerated v-angle frees the board up quickly for enhanced shorter turns and ultra quick rail-to-rail performance. The parallell outline converges into the tail area under foot providing ample lift for early planing and lots of pop for aerials and jumps. Cortex can easily adapt to different turning angles. With the stance set as far back as possible, the inner angled rear section adds grip in top turns, and extra torque in tight bottom turns. In addition, a pulled back mast track gives the rider the choice of freeing up the board even more by placing the mast in the rear of the box, or to stabilize it for longer turns or jump oriented sailing by placing the mast foot slightly further forward.Cortex comes standard with five carbon slotboxes for quad fin, tri fin or twin fin setup.

The tri fin setup will provide early planing, great upwind tracking and ease of sailing while still providing a insanely tight turning radius. On the wave, this setup will give you the best possible projection and drive in turns, assisting the sailor in keep speed through the bottom turn, even in less powerful waves. Versatility and snappiess with a user friendly feeling are the main characteristics of this setup.

Equipped with a quad fin setup, the Cortex gets more planted and controlled at higher wave riding speeds. The power of the fin cluster acts further forward, which drives the front rail into the water and gives the board added control in draws out turns. At the same time, the shorter depth of the two rear fins makes it easer to set the rail at high speeds which means that the board feels more responsive in fast sideshore or cross offshore conditions.

With only two fins, drag is lower and the fin power acts further back on the board. This lifts the nose of the board which in a straight line adds further speed and gives more looseness and quicker reactions in turns. The combination of twin fin and the fast tail rocker provides great ability to set up the top turn either for slashy release or solid power hooks.

The Electric Flex Technology
Our layup, construction, and reinforcement are all placed in where user needs and they all work in together to create the optimal stiffness to weight ration. The construction moves with you, rather and against you, which makes the board feel more lively in every movement. We call this technology Electric Flex. For our wave boards we use 45 degree carbon layup for maximum the strength and flex and for our flatwater boards we use 30 degree carbon layup for more vertical strength. Basically, flex and stiffness where its needed. The main features of the construction is the PVC Sandwich stringer. This is the spine of the board which absorbs and distributes the force from impacts throughout the boards entire construction. This eliminates unnecessary breakage as stress is shared between the entire hull, creating a much more durable construction. The stringer also helps to maintain the rocker curve during manoeuvres.
FEATURES

- Cortex combines fast rocker with a progressive v flow for good control.
- Parallel outline and smooth rails gives the rider good control and speed in botom turns
- Awesome performer for real world conditions where it delivers snappy turns and quick reactions.
- Outline is shortened by using a diamond tail, which allows for a even tighter turning radius,  and ultra quick rail-to-rail performance.
- Quick accelerating v-angle frees the board up  for enhanced shorter turns and ultra quick rail-to-rail performance.
- Cortex comes with 5 carbon slotboxes which gives you a large spectrum for trim options.